A post from Andrew Mallinson, guide and all round mountaineer/skiier

I recently spent some time in Chamonix in the French Alps.  Activities included some piste and powder skiing as well as a few day ski tours.  Weather was mixed and so I made the best of the conditions on any particular day to get something done.

Not wanting to neglect the social side of life, I hooked up with old friends and drinking haunts of yesteryear – I first went there in 1979 !  The realisation of my advancing years came quickly.  First the Bar Nationale.   A dubious haunt of British climbers for far too long, (did I really dance on the tables to Bruce Springstein ?), is now an upmarket bistro type place complete with patio heaters and soft furnishings.  Not a smelly Helly Hansen in sight.  Next La Choucas.  The skiers bar of choice.  I looked at the bright neon lights….then I suddenly realised it’s now a fashion shop.  I was distraught actually……briefly remembering a new year in there where what happened is best left unsaid….

The proliferation of equipment and gear shops continues apace.  Just like the bars, things continue to change.  Snells and Ravanels are still there, but are now accompanied by a plethora of shops dedicated to each individual brand.  In one of the shops I was looking at ski touring trousers but slowly became distracted by a conversation.  In the corner a technically knowledgeable shop assistant was in the process of selling a £900 avalanche air bag system to a customer.  Lots of technical information about the air bag and what it could possibly do was shared.  The potential life-saving capabilities demonstrated with ipad videos, and little models resembling those snow dome things you shake and the flakes go everywhere.  Apparently this lady could ski wherever and whenever she liked now without fear. 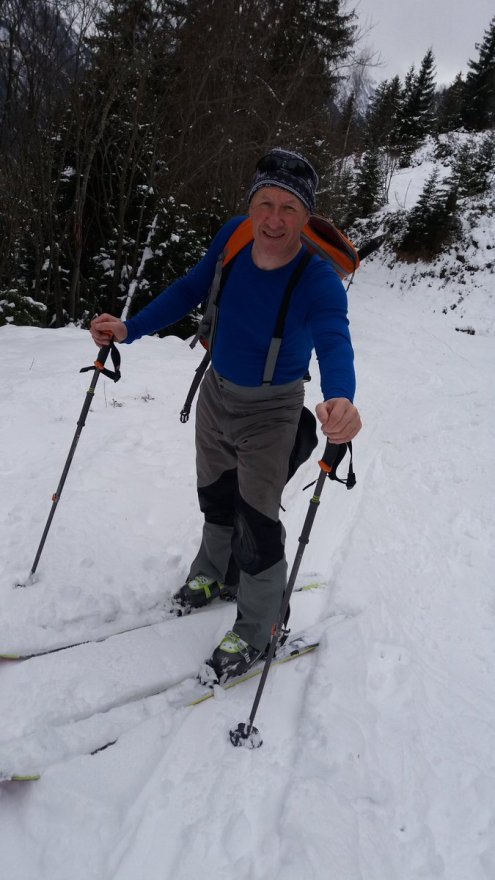 Two days later and there was a big fresh fall of snow.  I was keen to get going and make the best of it.  I caught the bus from Chamonix at 07:20 and was in Les Houches for just past 8am.  Looking as nonchalant as I could I slid on to the first cable car with the lifties and bar staff.  Putting my skis on at the top of virgin powder pistes I was completely on my own – EPIC !!!!  Plenty powder on the Les Houches pistes which they didn’t groom….the skiing was great.  Knee to thigh deep on a solid base……just wonderful silent skiing.  Down at the bottom and with the my ski peace shattered I jumped back into the cable car along with a couple of North Americans – complete with avalanche airbags.  They were enthusiastic and keen to explore the trees of the Les Houche basin, and rightly so.  What was disturbing however was the comment “Don’t need to worry about avalanches mate, we’re both carrying air bags.”

There is no doubt that technology has improved the skiing experience.  Modern technology in the form of improved bindings has led to far fewer injuries.  Modern materials have made skis more responsive and accurate – ski length bears testament to that.  But I find the encroachment of technology into the avalanche equation deeply worrying.  Not the technology per se, but the impression it appears to be giving to people that they are now invincible….. “An air bag may be £900 madam but it will save your life,” said the salesman.  Well, will it?  And will a probe, shovel and avalanche transceiver save your life?  Really?

Many, indeed most avalanches are triggered by the victims themselves. ….and many are killed or injured by trauma suffered during the avalanche.  So avoidance is clearly preferable.  Therefore, question….how many people spend £300 on a probe, shovel and transceiver, or £500+ on an air bag ,AND an avalanche education and avoidance course?  Listening to overheard conversations, (a bad habit I know), would suggest some people don’t think its necessary….and I wonder if the technology is contributing to this attitude.

Things do change, be it watering holes or technology!  But I cannot foresee a time when technology is a replacement for education and good decision making in the mountains.  Or am I just full of hot air ?