The last year has been a mixed one..house moves (x2), demotivation, new motivation, Skiing , alpine adventures, adventures in vinyl (another story.. ) and through it all I’m always found to be craving the next challenge, the next distraction the next obsession some would say.

In among it all is whats most important – my home and my loved ones, most of all my (very patient) wife and often I need to remember just having time together is all I actually need to “feed the rat”.

She recently discovered that her company have a mountaineering club and as a bonus own a couple of bunkouse’s in great locations around the UK. One of these is in the heart of the Lake District very close to a very historic and very cosy pub.

Sensing we both needed a break from a long summer without a vacation she sorted out a long weekend for us to get away, enjoy the mountains and satisfy my adventure need and with the time booked I finished the planning , mapping and gear prepping and off we headed.

We arrived on the Friday in time to grab a beer at said pub, settle into the cottage and get to bed early enough for an early start on what proved to be a lovely sunny day.

Great Langdale has some of the most beautiful mountains either right on its edge or close by but as were on our holidays and fancied a nice walk instead of a tough hike or climb we opted for Bow fell by the band. This is by far the easiest route up the mountain and just along the road from our front door so as we walked in the sun we quickly left the world behind. Not having to get up 2 hours early and drive , find a space and bail out like a military operation starts you off in a very relaxed frame of mind and it was with this contentment we started out ascent, not another soul around.

The band offers a gradual and sustained climb, allowing plenty of time for views, chat and just enjoying the journey. On our way up the only other things around were the sheep, the butterflies and the numerous buzzards circling overhead, their wings so mighty the sound of then was like waves crashing to shore.

Nearing the summit , as you reach the col (a dip between two peaks, known in Scotland as a bealach and Wales as a cym) and the landmark “three tarns”, people appeared from all directions, some from crinkle crags , some returning from the summit and while the peace was broken the good-humoured chatting began and we spotted some great slabs of rock to have some fun scrambling on.

Soon we were on the final , rock summit push and within minutes stop atop the boulder strewn summit surveying the mountains all around and the valley below, dark clouds starting to bubble in from the south promising rain if we didn’t escape soon. 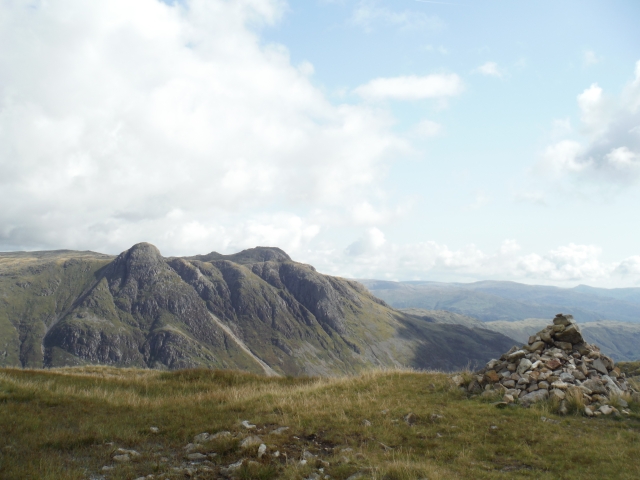 Obligatory summit snaps done we made our way down, passing the procession of those later to rise now making the pilgrimage to the top. On the lowest slopes looking back to where we began all thoughts were now on a welcome rewards for a very fine walk indeed – beer.. and then an open fire , friendly chat and a nice single malt. Perfect way to end a lovely day.

I’ve been fascinated by standing stone for as long as I can remember. I can recall reading an Arthur C Clarke book about all things mysterious at my uncle Jim’s house when I must have been very young and subsequently through other books and the steady diet of documentaries my dad encouraged me to watch as a child (its was the late 70’s/early 80’s and with only 3 (yes Three) channels available you often watched whatever was going whether you wanted to or not.

Among crystal skulls, UFO’s , Dungeons & Dragons and tales of ghosts and ghoulies , stone circles and the time of the druids absolutely enthralled me (and still do I have to admit).

On our second day we had intended to walk up Helvellyn, another of the very well-known and popular lake fells but with high winds already incoming and a frankly miserable day forecast we opted instead to just go for a drive around the area and visit some towns, grabbing coffee and just enjoying the time off. While surveying the map i spotted the stone circle nearby so off we went. My wife is also interested in things somewhat supernatural and historic so it took no persuasion.

Finding it was easier said than done. Working only from an AA road atlas we found the sign that read “Stone Circle 2 miles” and off we went. First we met a trio of 3 Germanic tourists also looking for it and we agreed as we set off in different directions, to let each other know of we found it. 30 minutes and much field plodding later we were re-united, neither party having found it. We did discover the tourists were a group driving across the UK on WWII German motorbike and sidecar so happily took some photos, fascinated at these pieces of motorized history.

Back in the car it was time to try again.. following the road further I had narrowed the location down and after parking again we walked along a rough farm road , passed flat fields of bored looking sheep (with oddly long tails) until all of sudden we could see people in a field, mostly obscured by the lovely stone walls that are everywhere in the area.

Then we could see the circle.

Often these can be quite unassuming affairs but Castlerigg is very impressive indeed. Walking towards it, slowly to allow ourselves to take in the setting and how perhaps the circle conversed with the land and the surrounding mountains we arrived and noticed the Germans had also found it. The stood in the middle close together, quietly chatting and taking it in, seeming almost to be connecting with it far more than the other tourists and kids clambering over the smaller stones ,  seeming all of a sudden like Saxons visiting their past in a way we just didn’t connect with (I envy them that if so).

Castlerigg is one of the oldest circles in Britain,unlike the more common Bronze Age ones from around 800-2000 BC this was  erected in the neolithic around 5000 years ago and with its position on a plain surrounded on all sides by mountains one of the most atmospheric and beautiful I’ve seen. At almost 100 feet across, not including its pretty distant outlier (next to the stile you cross the wall on to the west) – it’s also pretty big. For more information check out the  web page . 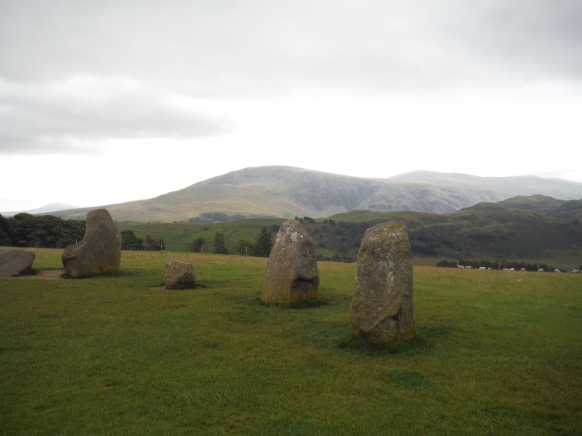 We spent some time, travelling round the circle, touching each stone as  we went, viewing the surrounding hills from within and taking pictures then with our ancient spirits nourished we headed back along the path, just taking in the countryside content with a lovely second day out.

On Sunday night at the pub with its history and photos of famous climbs and climbers we sat enjoying a pint then spotted a friend from the area Jill Sherlock (who I hope to persuade to write some blogs for you as her adventures are incredible! – see her Twitter feed @sherlocktales ). Having met her the previous year this time we  bumped into Jill as we plodded up Bow fell, and she was running down it ! We chatted and on finding out we were leaving for home the next afternoon and with the forecast for even worse rain, she offered to share a little hidden treasure with us, and even draw us a map!

Joining us ( Sam heading off to find us a nice single malt) Jilly got to explaining all about this beautiful cave system close by that offered “the perfect wet day adventure” – who was I to resist. With our single malts in hand and the rough map before us, we chatted away about her upcoming cycle adventures and heard her tell of some of her other expeditions and escapade as far north as the arctic and as intriguing as the mountains of Pakistan. Hopefully she will share them in time with us here.

Next morning we were all packed for home and with the rain coming down but our waterproofs installed we headed off to Little Langdale to find this gem. Winding thorough the narrowest of country lanes, past cottages built of the beautiful local stone we finally found the starting point, parked the car and headed of down the road. After a few hundred metres we arrived at the ford as described crossed it and headed along the forest road to find the style that marked the start of our adventure.

The sign warned us of the dangers of disused mines, the slate remnants all around and the rain coming down we headed into the woods, climbing the hill of earth and stone. Nearing the end of the path, guarded by the numerous giant slugs were found ourselves peering into a natural rock amphitheatre. It was stunning. 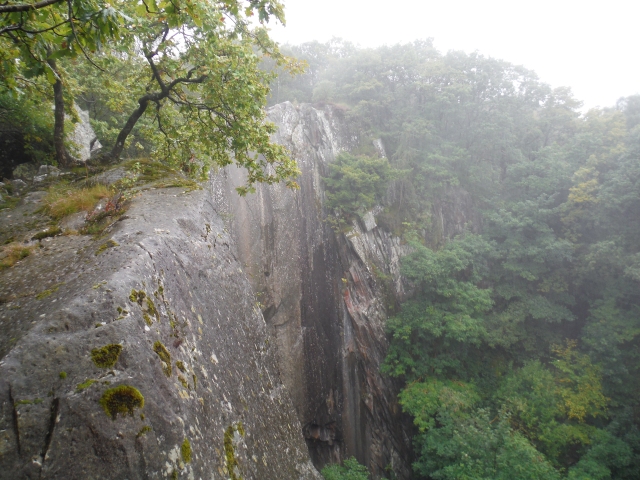 But where was the entrance to the caves we knew lay below? Looking down I could see an opening low down the wall and off to the right. Realising we had climbed too high we worked our way down the hill on the other side to find as small building built entirely of slate, standing guard over a sunken entrance corridor. We had found it!. 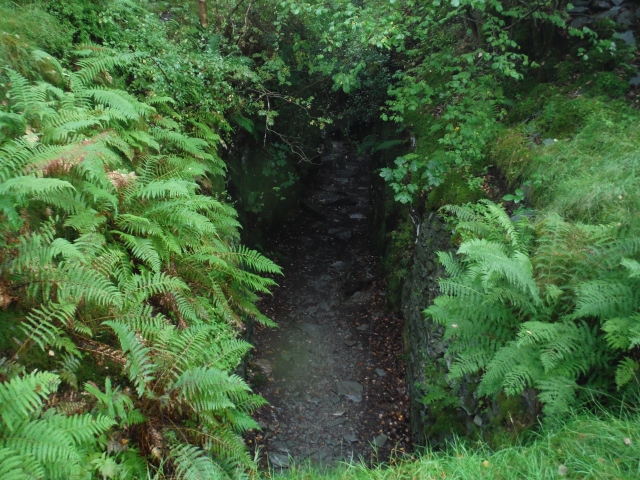 Making our way under the over grown archway we moved along the throat of the cave, dripping water above until it opened into a stunning high cavern. At one end a gaping mouth allowed us to look down into the “Cathedral” of rock below, a giant pillar of rock , aeons old seemingly supporting the roof and a shaft of light illuminating it from the site. After some searching we found the way down to the next level and entered the grandest cave i have ever been in. an opening high on one wall letting light stream in a magical way, the pool of water below catching it and reflecting around the walls. 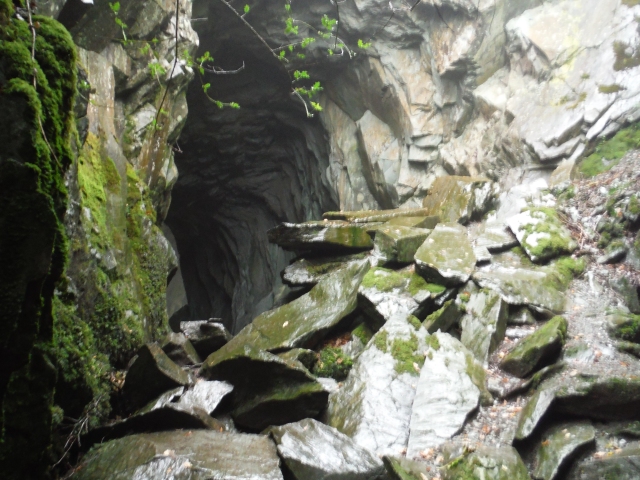 Known as Cathedral Cave it’s a stunning remnant of the slate quarrying so common at one time in the area. to think men carved this out of the rock is almost unimaginable. Their work not intending to be beautiful but becoming so in spite of it, The earth reclaiming what was so brutally stolen from it. 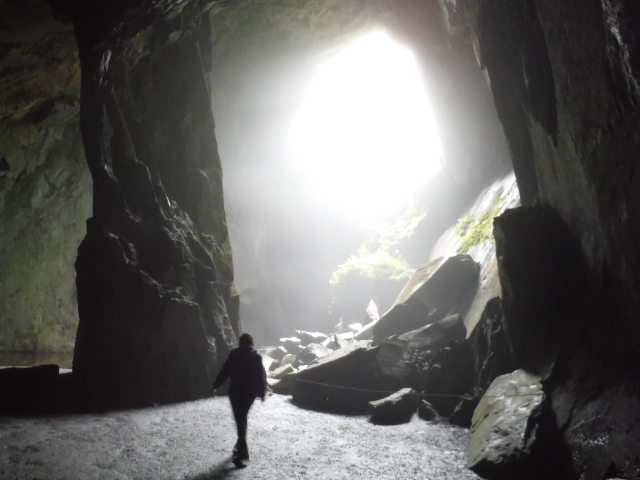 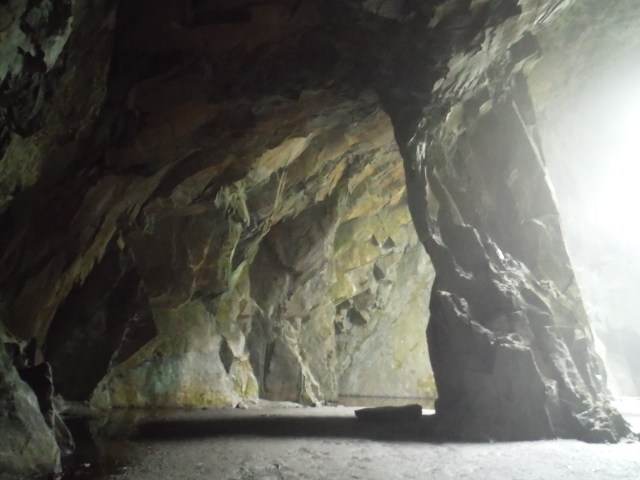 We wandered the caves, took photos , gazed in wonder at its formations then explored some adjoined passages before emerging once again into the world to head for home.

It really was  the perfect rainy day adventure. And more it was an adventure to complete a perfect Triptych of adventures and leavings us content and happy to return to the world once again. 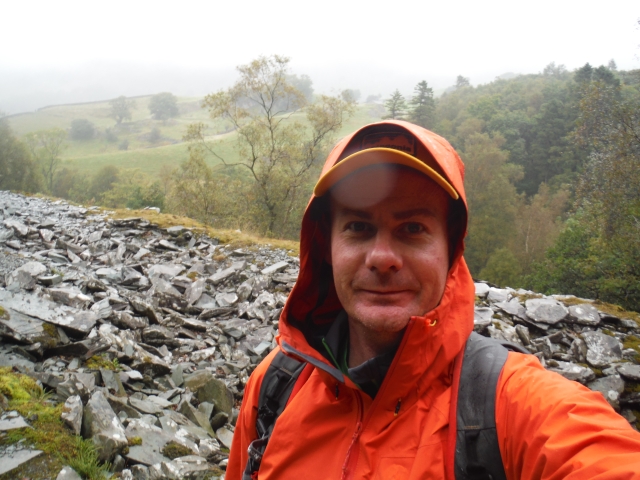