I’m not given to philosophy, religion or politics in any meaningful way.  I used to be, but for a variety of reasons I’ve become disengaged in recent years.  Consequently climbing has provided my physical, spiritual, intellectual and mental nourishment.  As a result my prior articles have tended to focus on the mountaineering in isolation from what’s happening out and about….

Somewhat of a naïve viewpoint one may say…..

Things have a habit of colliding eventually……

Last week I was at the excellent TCA in Glasgow.  I am following the “Training for the New Alpinism” regime so I was there for training….plenty of mid-grade aerobic traverses.  The music was cranking out Dire Straits, the chat was good and I wasn’t feeling too knackered after the morning run.  I was looking forward to seeing my girlfriend again later and so was feeling positive…..

In the middle of the bouldering walls there is a place called the pit….it’s a big rectangular floor space between  the crash mats where climbers dump bags, chalk up and check text messages.  I was due a break so I went and sat on my sac in the pit, along with about six or seven others.

A young woman came and sat opposite me in the pit with a baby in a car seat – 7 weeks old apparently.  The wee fella was crying, obviously hungry, (I was and am, a dad).  The young woman proceeded to breast feed the boy, and no-one missed a beat.  No-one broke conversation.  No-one moved their gaze.  Exactly as it should be.

A young guy joined us in the pit, sweating profusely.  “Fuckin turban” he said.   Ripping it from his head he threw it in his sack and adjusted his hair band.  Huge laughter all round.

I was starting to look around now….and I mean really look…..

On the overhanging boulder wall away to my left was a guy obviously in his 70’s, possibly even older, cranking out some ridiculous black problem that I knew I wouldn’t get off the ground on.  A few claps when he matched the top hold.

To my right, in the gym area, was a very well-muscled guy.  Tattoos gave away his prior military profession and I know he has long suffered from Post Traumatic Stress Disorder.  He was helping a middle aged woman do some stretching exercises.

Right in front was a young girl, 15, 16, or so….  Her arms bore the obvious scar tissue of someone who had self-harmed.  She was shy, and spoke very quietly, but came and joined us in the pit.  No-one stared…and she didn’t hide. 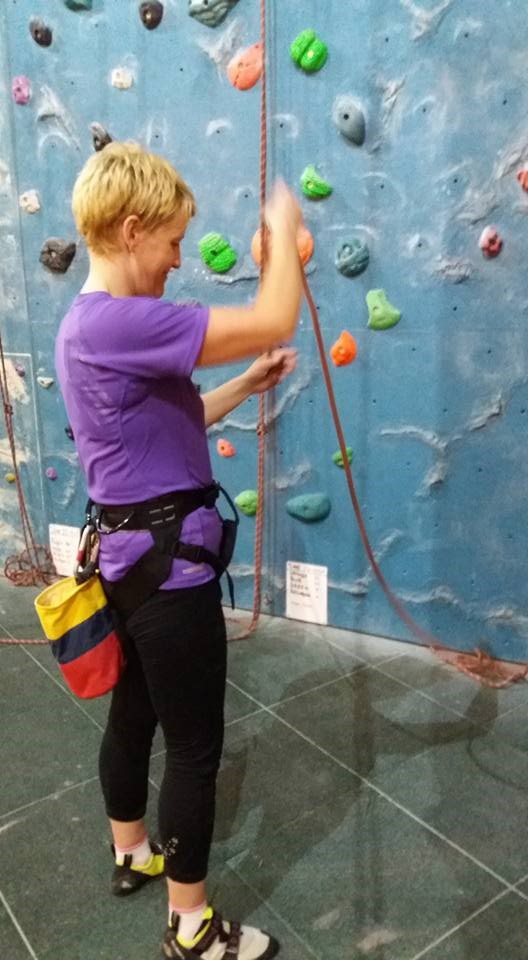 What struck me upon thinking about these people was their sheer diversity.  Probably, if I’d been bothered to ask, I could have possibly found someone from every social grouping in society.  But that was the point…no-one was bothered.  Not by the ethnic diversity, the breast feeding, the baby, the old guy, the psychologically struggling muscle man or the challenged young girl.  Everyone was just doing their thing, and connecting around the common purpose….climbing.

Climbing and mountaineering do not exist in isolation.  They reflect the diversity of the world around us.  What however, mountaineering and climbing do seem to be able to overcome is the perceived and actual divisions in society, and ameliorates the negative effects thereon.  Division comes from a conflicting view of the end goal, a disputed common purpose.

For climbing, whilst diverse in nature, the common goals can be simple….doing the move, getting to the top, solving the problem.  What climbing and mountaineering seem to be able to achieve, and thus the people taking part, is an acceptance of diverse goals as part of a common purpose.  Paradoxically, what that common purpose is can be different for individuals – but it provides a common bond between participants.  The climbers at TCA that day were clearly diverse, clearly had individual goals and demonstrated a common purpose within a shared passion.  They accepted all and judged none.  What a shame other sections of society are unable to do the same.